The success stories keep on coming from Plymouth Leander - this time it's been the turn of 23 year old para swimmer Reece Dunn to earn selection for Team GB.

Reece has swum with PL since he was small but only recently got his para classification.

His selection for the 2019 World Para Swimming Championships in London this September comes after a fantastic performance at the British Para Championships in Glasgow - where he broke the World record for the S14 100m freestyle and set a new British record in the 100m butterfly.

Reece, who works for his Dad's carpet fitting business in Plymouth, is delighted. "It's very exciting to finally get to represent PL and GB on the international stage," he said.

"I’ve been at the club since 2006 so it’s nice to finally have a breakthrough in the sport, after so many hard times it makes moments like this feel all the hard work has paid off.

"I’d like to thank my family for all their support over the years as without their help I wouldn’t be where I am today. Also all the hard work that Robin has done with me and everyone over the past 2 years and for the future." 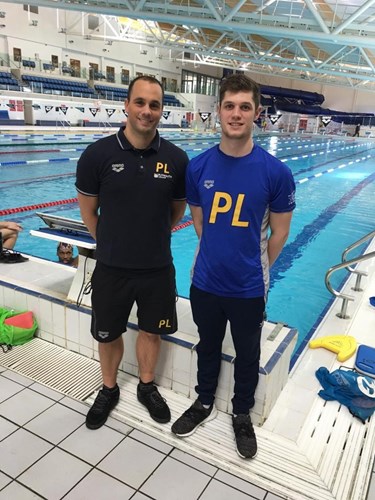 Head Coach Robin Armayan said that despite an extremely busy schedule, Reece has proved he can be fast, fit and recover quickly from heat to final and day to day.

"British Para-Champs was a great experience and stepping stone toward the World Para Champs," he said.  "We will now be working hard to prepare and perform in London on the world stage.

"Reece has swum with Plymouth Leander since he was 9 years old, we are extremely proud of him and he is a great inspiration to our younger swimmers and shows that hard work and commitment can pay really."

It comes just days after four other club swimmers were selected for Team GB - Ben Proud and Laura Stephens for the World Championships in South Korea with juniors Honey Osrin and Sophie Freeman (15) selected for the European Junior Championships. 16 year old Honey was also named in the squad for the world juniors in August.

"It's been an amazing couple of weeks with our swimmers selected to swim for team GB," said club chairman David Ellis. "That's a reflection of not just the swimmers themselves, but led by Robin , the commitment and dedication of our coaching team in preparing our swimmers to perform to the best of their ability."